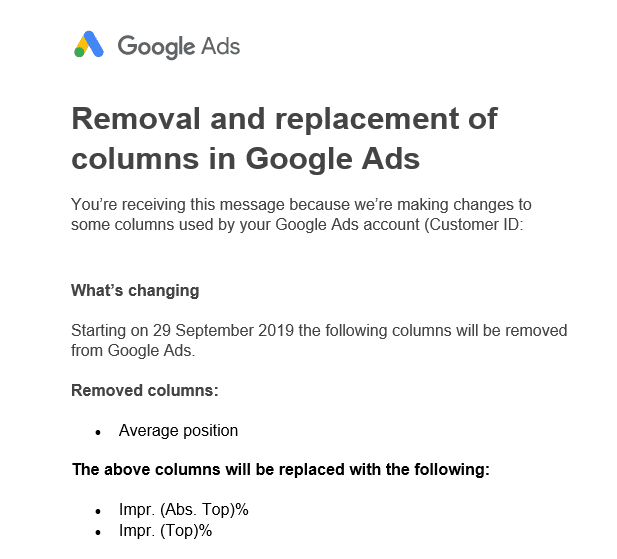 Removal and replacement of columns in Google Ads

So Google are making some interesting changes to their PPC Ad accounts and look to be removing a key metric. I’ve just got this email that states for one of my clients Ad position is going to be removed.

Starting on 29 September 2019 the following columns will be removed from Google Ads.

The above columns will be replaced with the following:

This is also marked in the column with a notice saying Avg. pos. will no longer be available starting 30 September 2019.

They don’t say but it will be much like the current Search Impr. share where it shows how many times you showed for your keyword search term. Except for it will state that percentage especially for the top ads. Much like the existing search top IS column which seemingly does the same thing and would be a better replacement choice.

Why is Average Position important?

As with most of Googles changes, to the inexperienced, this may not mean anything. Google will no doubt go on record and say this is in the benefit of the customer as they can see how often they are visible in the key area.

Ad position is a crucial guide to optimisation to make sure people see the advert. On mobile, for example, some search terms only show the top 2 positions. Top 4 is usually top of the page so where you want to be. This is in effect kills manual CPC optimisation to deliver value, as often I would increase the bidding based on being below 4th, and decrease bids for over-performing keywords to reduce a bidding-war. This new stat means it’s all guesswork, but more importantly, means people will naturally aim for 100%. It also means Google Rep advice will switch to this improving this statistic, which has precedence with the search impression share when launched. This fits in with Google’s method of driving up the CPC and bidding wars, where the only winner is google and the losers are the companies that go out of business.

I’ve seen this with one of my long-term clients, and Ironically I referenced them in my last blog post about Google’s driving clients to CPA where the tests of moving to CPA meant lower ad position, lower CTR and increased CPC. Coincidently this same client I was recently pushed to authorising Google to make changes to the account for some new ad content uploaded and I had to revoke it when they made those live without the agreed client signoff.

Did I mention that this particular client spends millions of pounds a year? It makes sense it’s on Beta testing or the first wave, but interesting of the many accounts I manage it’s the only one to get this email. Although in fairness is the only account with Google Reporting set up rather than external 3rd party reporting which may be the reason.

What stinks about this, is in theory they are hiding one of those key stats which is highly suspicious behaviour to me. As mentioned I have huge concerns over moving over to CPA which I think is part of the greater strategy in removing agencies in the middle, and still can’t fathom how they are allowed to even do it under monopoly laws (Antitrust in the US). Let me explain again how CPA works.

What is CPA (Cost Per Aquisition)

CPA or Cost per Acquisition is a metric the measures the cost to acquire a sale and can be granulated to the campaign, ad group, keyword level. It’s simply total spend divided by the number of sales. Cost per conversion is the same but takes into account conversion set up so could be a sale, view of key page, call, etc.

What is CPA targeting?

In each campaign, you can set a campaign goal from sale, lead or website traffic. Google says they will optimise for this action from recorded customer behaviour.

The campaign setting of Target CPA is a Google Ads Smart Bidding strategy. It claims to set bids to help get as many conversions as possible at or below the target cost per action (CPA) set.  In an ecommerce sense, it says they will target consumers most likely to buy. Logically this can only be based on their internet history and actions undertaken.

What is wrong with CPA?

So say there are 4 clients targetting the same area for the same product/service and are all on Google Ads. Each client uses max CPC, so in effect set the bidding against each other in the keyword auction that it was set out to be. One client would be prepared to pay more for a click, others less, but ultimately they themselves are dictating this and are in full control.

Google in their advice on the dashboard for “improving the account” and via their account managers who constantly call, then move all of those clients onto target CPA. Now Google controls the CPC bidding for each client.

On paper seems fine, but you have to consider that the only people that financially gain from this is Google themselves. So they have control over bidding, and the higher the bids, the more Google makes. They are literally choosing themselves on what to charge, so calls into question legalities.

The antitrust laws prohibit conduct by a single firm that unreasonably restrains competition by creating or maintaining monopoly power.

My big issue with all of this is how it’s being managed and language used. Manual CPC use is discouraged and so is any form of manual control. Anything other than smart goals is actively not recommended

And my personal favourite the optimisation score, where you are encouraged to get 100%, which includes changing to CPA targetting.

These are also clear marketing strategies for me for herding people down a particular path. What awaits at the end is yet to be fully known. Currently, people do report good CPA results which I can personally confirm. But what happens once they have the full bidding control and everyone is on CPA? We’ll just have to wait and see but I suspect Google will be posting record profits.

I’ve contacted the google account manager for this account but I got an out-of-office until September 2nd, so guess there are no quick answers until other people start picking it up.